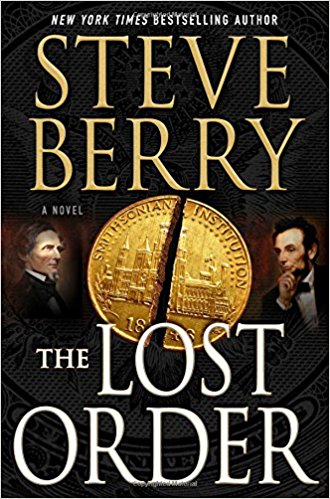 The Knights of the Golden Circle was the largest and most dangerous clandestine organization in American history. It amassed billions in stolen gold and silver, all buried in hidden caches across the United States. Since 1865 treasure hunters have searched, but little of that immense wealth has ever been found.

Now, one hundred and sixty years later, two factions of what remains of the Knights of the Golden Circle want that lost treasure—one to spend it for their own ends, the other to preserve it.

Thrust into this battle is former Justice Department agent Cotton Malone, whose connection to the knights is far deeper than he ever imagined. At the center is the Smithsonian Institution—linked to the knights, its treasure, and Malone himself through an ancestor, a Confederate spy named Angus “Cotton” Adams, whose story holds the key to everything. Complicating matters are the political ambitions of a reckless Speaker of the House and the bitter widow of a United States Senator, who together are planning radical changes to the country. And while Malone and Cassiopeia Vitt face the past, ex-president Danny Daniels and Stephanie Nelle confront a new and unexpected challenge, a threat that may cost one of them their life.

From the backrooms of the Smithsonian to the deepest woods in rural Arkansas, and finally up into the rugged mountains of northern New Mexico, The Lost Order by Steve Berry is a perilous adventure into our country’s dark past, and a potentially even darker future.

Steve Berry is the New York Times and #1 internationally bestselling author of 11 Cotton Malone adventures and 4 stand alone novels. His books have been translated into 40 languages with over 21,000,000 copies in 51 countries.

History lies at the heart of every Steve Berry novel. It’s his passion, one he shares with his wife, Elizabeth, which led them to create History Matters, a foundation dedicated to historic preservation. Since 2009 Steve and Elizabeth have crossed the country to save endangered historic treasures, raising over one million dollars via lectures, receptions, galas, luncheons, dinners and their popular writers’ workshops. To date, over 3,000 students have attended those workshops.

In 2012 and 2013 their work was recognized by the American Library Association, which named Steve as the spokesman for National Preservation Week. He also serves on the Smithsonian Libraries Advisory Board. He has received the Royden B. Davis Distinguished Author Award; the 2013 Barnes & Noble Writers for Writers Award; his novel The Columbus Affair earned him the Anne Frank Human Writes Award; and International Thriller Writers bestowed him their Silver Bullet for his work with historic preservation. A 2010 NPR survey named The Templar Legacy one of the top 100 thrillers ever written, and The Patriot Threat won the 2015 Audie Award as best thriller audio of the year.

Steve was born and raised in Georgia, graduating from the Walter F. George School of Law at Mercer University. He was a trial lawyer for 30 years and held elective office for 14 of those years. He is a founding member of International Thriller Writers–a group of more than 3,800 thriller writers from around the world–and served three years as its co-president.